Most startups have two important challenges: limited cash and insufficient manpower. According to this point that the internet has created a barrier to entry for e-commerce businesses, allowing people to start a business with just an idea and a laptop, it’s also created a world where new social media platforms are popping up all the time. How does a company devote their limited resources to the social media outlets that will be most useful?

In this post, you will know how you can find the best social media platforms for your business.

If you know the answers to three questions below, it’s easy to pare it down to two or three platforms to dedicate your time to.

If you want to save your time, take a look at the list below where I I’ve broken down the five best social media networks for marketing, including their major audiences and best industries for the channel:

When you answer the above questions and match your answers with the five platforms, you’re well on your way to a successful social media marketing strategy.

B2B stands for “business to business” that refers to sales you make to other businesses rather than to individual consumers. “business-to-consumer” or B2C referred to Sales to consumers.

Unfortunately, we don’t know where people go on social media platforms when they want to buy things, but a general rule is that people on social media are at the top of the sales funnel, that is to say, you might be targeting your promotions and social media marketing strategy for the wrong buyer’s stage.

The best B2B social media strategies aim to generate interest in your product. Do this by regularly blogging, creating lead magnets like case studies, and promoting your business on the best B2B platforms like LinkedIn.

Define Your Target Audience by replying to These Questions

You are wasting your money when you target the wrong audience, so you can determine them by the answer to the question below:

For example, Facebook’s Audience Insights is a simple tool you can use to profile your target audience.

Defining business goals for social media marketing strategy is a critically important task when the time is ripe to set progress for your efforts.

Setting and monitoring goals for your progress are important steps to help you get from where you are now to where you want to be on all your social media channels like Facebook, Twitter and so on.

Social media network is an effective tool that can support your business objectives but just like with any other business tools, it’s important to concentrate on your efforts.

Top Social Media Platforms that Are Best for Business

It began in February of 2004 as a school social network at Harvard University. Facebook was created by Mark Zuckerberg along with Edward Saverin.

It began with an idea by by its co-founder Jack Dorsey 2006. It is known as a micro-blogging platform. Posting a message on Twitter is known as a tweet. People make connections by following others. When you click follow, anything that user or Brand says will appear on your timeline.

If your Brand has the right audience and an element of customer service, I recommend that you make Twitter a platform of choice.

It is becoming a central hub for consumers, so it’s a good place to show off your products, and creativity.

Target Audience age and gender: men and women from 18 – 29

It was created by Kevin Systrom and Mike Krieger and launched in October 2010 exclusively on iOS. A version for Android devices was released a year and 6 months later, in April 2012, followed by a feature-limited website interface in November 2012, and apps for Windows 10 Mobile and Windows 10 in April 2016 and October 2016 respectively. It is a social media networking platform made for sharing photos and videos from smartphones. Similar to other social media like Facebook or twitter, people who create an account has a profile and a news feed.

It is owned by Facebook, so Instagram it has many similar features and ad targeting options, which makes it a good option for brand awareness and engagement. If you don’t have a visual product try a different platform.

Development of Pinterest began in December 2009, and the site launched as a closed beta in March 2010. Pinterest is like a web-based pinboard but with greater organizational functionality. You can also think of Pinterest as a bookmarking tool.

People pin or save images they find on the web to different boards to categorize their image collections.

It is also a Social Media. People interact with each other through liking, commenting, re-saving each other’s images and private messaging each other.

It has reached 250 million monthly active users as of October 2018.

If you think your audience is on Pinterest and you have the visual product that has to do with the visual strategy like home remodels, then Pinterest is the platform for you.

It was founded on December 28, 2002, and launched on May 5, 2003, It is a social media platform for professionals. Whether you’re a marketing executive at a major company, a business owner who runs a local shop or even a first-year college student looking to future career options, it is for everybody who’s interested in taking their professional life more seriously by looking for new opportunities to improve their careers and to connect with other professionals.

If you are B2B, LinkedIn should be the main social media platform for your business.

Target Audience age and gender: both men and women from 25 – 45

Social-Media“Social media is the ultimate equalizer. It gives a voice and a platform to anyone willing to engage”-Amy Jo Martin 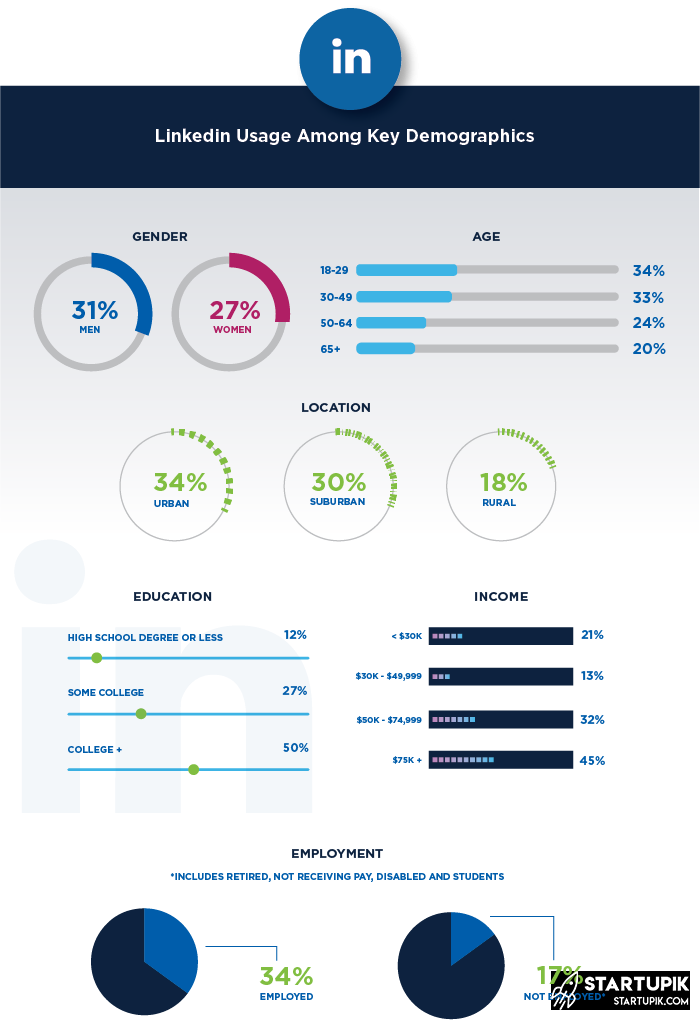 Some Statistics from LinkedIn that You Should Know:

If you understand which social media network to use for what, not only will it save you time, but  also it will prepare you to get further down the path to your goals. However, it doesn’t mean you don’t have to spend a lot of time on it.

Experts always recommend that you spend at least six hours per week on monitoring, posting and so on, If you don’t have time to strategise, engage in real-time, and schedule posts, so you need to find a partner who can do it for you.